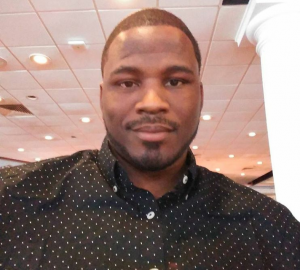 I was born in Birmingham, Alabama in 1987. My grandmother took custody of me and we moved to Boston. Growing up in Roxbury was difficult but my grandmother did the best she could to guide me. My first interaction with a dog came 1999. I was only 12 when I got my first job walking my neighbor Ms. Holder’s dog. She had a poodle named Rusty. The name fit considering that was his coloring. I took Rusty for daily walks and play. Still I didn’t know much about dogs. My grandmother really didn’t like the idea of me having a dog. I had a Rottweiler for 3 days at one point but he barked and howled all night. That was enough to drive my grandmother crazy. I couldn’t fix it so I couldn’t keep him.

With all my Grandmother’s guidance it still wasn’t enough to keep me out of trouble. I ended up catching multiple cases with the law. After my most recent case I was invited into a state run housing and training program. During intake, a case manager showed me all the services the program had to offer. One caught my attention N.E.A.D.S. (New England Assistant Dog Service). So I enrolled with a 5% chance of being chosen. 6 months later I was called to transfer to the housing unit where the dogs reside. Being the quick learner I am I picked up on the techniques fast. Training service dogs wasn’t easy; it took a lot of work, time, and patience. The Dog Training Instructor Brian Jennings said to me “Hey kid you’re a natural.” Those word inspired me. Sitting in my unit with my first dog Honey I made my mind up I wanted nothing more with the streets. From that moment on I set my mind on being the best Dog Trainer I can be. In 2016 I was released and got my first job at Petco training dogs. A year later and a bunch of experience gained, I met Martin Wright. He saw my potential and hired me here at Argos.

Here at Argos Dog Training I’m striving to be the best dog trainer in Boston.

Inquire about our Dog Training!